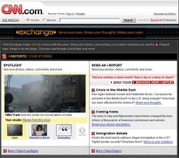 Time Warner Inc.’s CNN plans to standardize how it solicits and handles user-contributed news amid an industry-wide move to let consumers play a more prominent role in the news gathering process.

The cable news network on Tuesday plans to announce it has created a new program to let users send in digital audio and video from breaking news events in their region. Users can e-mail or upload these so-called “I-Reports” directly from CNN’s site.

Contributions are vetted by seasoned editors much in the same way all news tips are followed up, Susan Bunda, senior vice president of news at CNN/U.S. said in an interview.

A natural evolution for news sources, an idea Dave Winer tossed out 6+ years ago in his famous piece How to Make Money on the Internet. What’s in it for the citizen journalists? Jason Calacanis is offering to pay users for their “user generated content” at Netscape. How about CNN?

According to their submission form: Some of the videos, photos and audio submitted may be selected for use on CNN.com, in CNN television programming or other CNN programming services, so by sending information you are agreeing to our terms of use. What does that terms of use state:

…you hereby grant to CNN a non-exclusive, perpetual, worldwide license to edit, telecast, rerun, reproduce, use, syndicate, license, print, sublicense, distribute and otherwise exhibit the materials you submit, or any portion thereof, as incorporated in any of CNN’s programming or the promotion thereof, in any manner and in any medium or forum, whether now known or hereafter devised, without payment to you or any third party.

So CNN now makes it easier for you to send them news and not get any compensation for it. Contrast this with a recent move by Nashville NBC affiliate WKRN-TV which announced this month it would begin paying local bloggers for video.

WKRN president and general manager Mike Sechrist told a “meet-up” of local bloggers that he could envision the day when a daily program would be made up entirely of material submitted by the community.